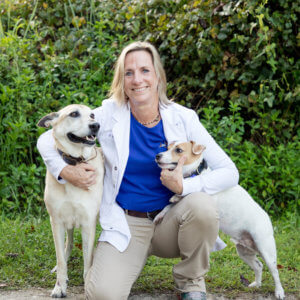 Dr. Karen Taylor was born in Coral Gables, Florida and grew up in South Miami. Dr. Taylor’s childhood hobby of riding horses and showing hunter and jumper ponies led her to become interested in veterinary medicine. She pursued her interest by volunteering for veterinarians throughout middle school and high school.

Dr.  Taylor attended the University of Florida and received a Bachelor of Science in Animal Science in 1983, and a Doctorate in Veterinary Medicine in 1988.

In September of 2008, Dr. Taylor opened the Animal Medical Center of Brooksville fulfilling her dream of having her own clinic.  She enjoys internal medicine and soft tissue surgery.