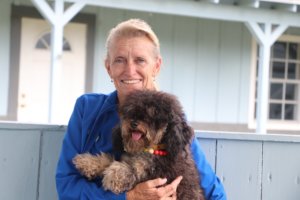 Linda Christian was born in Leeds, Yorkshire, England where she graduated from Leeds City High School and college. Linda is proficient in both French and German, which she accomplished through schooling and a year living in Switzerland as a nanny. She also lived in Germany and worked at a hotel as a receptionist. Linda then returned to the United Kingdom to work for Yorkshire Constabulary as a “Bobby” for 2 years.

Linda’s yearning for travel and the need to “see the world” lead her to follow her instincts; between backpacking and taking up employment as a “Trolley Dolly” (flight attendant) ultimately Linda has covered many parts of all continents to date! Linda’s career as a flight attendant brought her to the U.S.A. where she married an American and settled in Fort Lauderdale and eventually in Brooksville, FL. Linda has 2 daughters and 4 grandchildren, all living in North Carolina.

After being a stay-at-home mom, Linda returned to the work force, working for the YMCA. At the YMCA she was a lifeguard and taught swim lessons. She then moved to Brooksville and began working at the Hernando County Recreation Department as a lifeguard, supervisor, swim instructor, and environmental camps. County wide cut-backs lead to her job to be eliminated resulting in her career with Animal Control as an officer. Animal Control was then transferred to the sheriffs office where she retired early 2021.

Her desires to travel has not waned therefore she continues to travel backpack style as often as possible. Today, she incorporates her love for animals with traveling and usually volunteers with a wildlife organization someone on the globe and spends the remainder of her time discovering the country.

“I am very happy to be a part of the Animal Medical Center of Brooksville team where I can continue to work with animals and interact with their loving owners”. – Linda C.