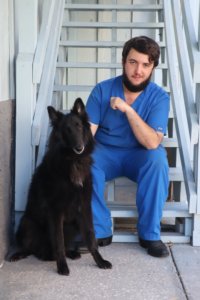 Cameron Meyer was born in 1999 in Brandon Florida.  In 2000 his parents relocated to rural Brooksville to raise their family in a small town with a rural lifestyle. Cameron embraced the country life, announcing at the age of three that he wanted to take care of animals when he grew up.  He attended many summers of Lowry Park Zoo Camp and enjoyed caring for a variety of small farm animals at home.  As a freshman in high school, Cameron joined the VAST program at Hernando High and obtained his certification by the end of his junior year.  Cameron has also been an active member of Brooksville Senior FFA where he has held several officer positions and has won awards at the county fair in the Steer Division of the youth livestock competition.  Cameron began volunteering at Animal Medical Center in August 2015.  He officially joined the staff the summer of 2016.  Upon graduation, Cameron plans to finish his AA degree at Pasco Hernando State College and then complete his undergraduate work at the University of Florida. He then aspires to attend the Veterinary Medicine program at UF.